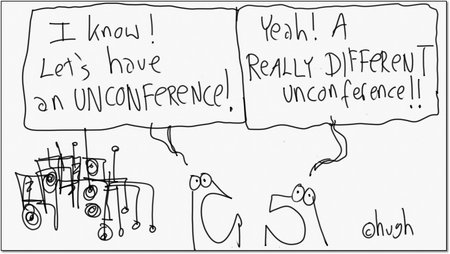 When confronted with a 326-page program offering over 600 sessions, moderation becomes a necessity. In the past, I have tried to cram in as many sessions and workshops as possible, leaving little time for meaningful conversations. This time, I did it differently. With the help of social media and some strategic planning, I was able to multi-task my way through #ASA2010. The conference became a collage – equal parts professional development, networking, and vacation. #ASA2010 had been a success! I left with new friends and ideas, and a lengthy to-do list.

The Virtual Conference: This is the conference held entirely online, in which the time and space limitations of the real world can be broken at will. The recent Critical Code Studies Working Group, held over six weeks this spring, was a good example, though the conference was, unfortunately, only open to actual participants. The proceedings will be published on Electronic Book Review, however, and at least one research idea seeded at the virtual conference may see the light of the day in a more traditional publishing venue. HASTAC (Humanities, Arts, Science, and Technology Advanced Collaboratory) has had success with its virtual conference as well.

The Simulated Conference: Like Baudrillard’s simulacrum, this is the simulation of a conference for which there is no original, the conference for which there is no conference. This sounds impossible, but in fact I hosted an entirely simulated conference one weekend in February 2010. It was a particularly conference-heavy weekend for the digital humanities, and since I couldn’t attend any of them, I created one of my own: MarksDH2010. Spurred on at first by Ian Bogost and Matt Gold, the simulated conference turned into a weekend affair, hosted entirely on Twitter, and catered by Halliburton. Dozens of participants spontaneously joined in the fun, and in the very act of lampooning traditional conferences (e.g. see my notes on the fictional Henri Jenquin’s keynote), I humbly suggest we advanced forward the humanities by at least a few virtual inches. As I later explained, MarksDH2010 “was a folie à deux and then some.” You can read the complete archives, in chronological order, and decide for yourself about that characterization.

The Unconference: Do I need to say more about the unconference? Read about the idea in theory, or see it in practice by following the upcoming THATCamp Prime on Twitter.