Some examples of skills that have been evolving for millions of years: recognizing a face, moving around in space, judging people’s motivations, catching a ball, recognizing a voice, setting appropriate goals, paying attention to things that are interesting; anything to do with perception, attention, visualization, motor skills, social skills and so on.

Some examples of skills that have appeared more recently: mathematics, engineering, human games, logic and scientific reasoning. These are hard for us because they are not what our bodies and brains were primarily evolved to do. These are skills and techniques that were acquired recently, in historical time, and have had at most a few thousand years to be refined, mostly by cultural evolution. 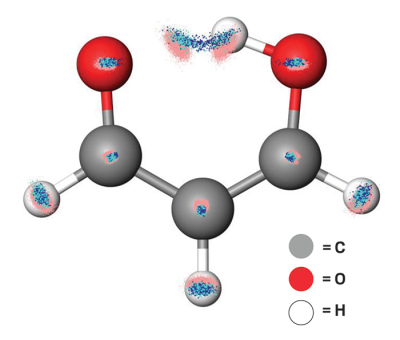 IBM researchers have developed a program that can predict the products of organic chemistry reactions.1 Modelled on the latest language translation systems – like Google’s artificial neural network – the AI picked the right product 80% of the time despite not having been taught any organic chemistry rules.

‘What this tool is trying to do is imitate a top pro chemist in more or less the entire domain of organic chemistry,’ says Teodoro Laino, one of the researchers involved in the study at IBM in Zurich, Switzerland. His ambitious goal is shared by other chemists who have been attempting to create a functioning AI chemist since the 1970s, when organic chemist E J Corey kick-started the field by creating a chemical knowledge database.

A machine learning approach could allow computers to determine the electronic structure of molecules without having to use the most resource-intensive equations of density functional theory, new research suggests (Nat. Commun. 2017, DOI: 10.1038/s41467-017-00839-3).
The new machine learning method was able to simulate intramolecular electron transfer in malonaldehyde.
Spam filtering, economic forecasting, and other activities, such as predicting material properties, are powered by algorithms that allow computers to learn from and make predictions on the basis of collections of data. In the case of material properties, computers currently make predictions after being trained with a database of electronic structure information for many types of substances.
A team led by Kieron Burke of the University of California, Irvine; Klaus-Robert Müller of Technical University of Berlin; and Mark E. Tuckerman of New York University now proposes training computers to connect molecules’ structure and properties by having the machines learn from maps of molecular electron density determined from molecules’ potential energy.
After training on existing maps, computers could predict a new molecule’s ground-state electron density. The molecule’s ground-state properties can then be extrapolated from its electron density, as theorized by Pierre Hohenberg and Walter Kohn in the 1960s. In the new work, the team was able to use its “machine learning Hohenberg-Kohn” approach to simulate an intramolecular proton transfer in the enol form of malonaldehyde [CH2(CHO)2].

Chemists have been building molecular models for centuries. It’s a crucial exercise in understanding the interactions that take place and are otherwise invisible. But there’s no denying drawing structures or fiddling with Molymod lacks the excitement and spectacle of a live experiment. Now, this traditionally dull activity could be about to get a new lease of life, thanks to advances in a technology more often associated with gaming: virtual reality (VR).

In David Glowacki’s lab at the university of Bristol, UK, molecules appear right in front of you in all their moving, three-dimensional glory. You can push, prod and even wrestle with them.

Glowacki has spent five years perfecting the Nano Simbox VR system, which gives those who don Occulus Rift-style headsets an experience of total immersion in the molecular world. Armed with ‘atomic tweezers’ one can attempt to tie a wriggling peptide chain into a knot, or manipulate a drug molecule so that it docks with the active site of a receptor

I tornat al disseny de rutes sintètiques en química orgànica: Algorithm modelled on Google’s AlphaGo beats chemists at their own game Organic chemists prefer routes plotted by software to those of other chemists

Planning how to make a molecule is often a difficult process requiring great skill, patience and an equally adept memory. But now a new computer program can sift through millions of chemical reactions to plan a synthesis in a matter of seconds.

Chemists often map out a series of complex chemical reactions under a variety of experimental conditions to make a molecule. Such planning involves plenty of trial and error, with countless hours spent consulting the literature before the synthesis is even attempted.

But chemists are now seeking to ease this process with automated synthesis-planning software. The latest example, Syntaurus, can map out a pathway in seconds – even if the target molecule has never been synthesised before. These algorithms typically rely on thousands if not millions of manually-encoded chemical rules to root out all possible options before ranking the most promising synthesis.

‘Techniques in molecular informatics and computational chemistry are now so advanced that it is hard to imagine a new chemical synthesis that is not computer-aided,’ explains Jonathan Goodman, a synthetic chemist from the University of Cambridge, UK, who was not involved in the research.

Advances in machine learning and artificial intelligence, coupled with robotic reactionware, are transforming our ability to explore chemical spaces – both in terms of building molecules and discovering or optimising reactions. With increased capacity for automated experiments, and less reliance on intrinsic biases, algorithms can extend and complement human intuition. In several areas, the robots are already edging ahead of humans in predictive power.

Of course, machines have their limitations, too. Producing a result that no sane, trained chemist would have thought of might be an amazing breakthrough, but equally it might just be garbage. The key to success is making best use of both humans and machines. That’s why I was interested to see Chemistry World Entrepreneur of the year Andrew Hopkins talking about ‘intelligence amplification’ as well as artificial intelligence.

Drug discovery is extremely complex. And most of our attempts fail. Naturally there is no way a single person can have a complete intuitive understanding of a molecule’s interactions with every protein in the human body (both target and off-target), as well as its physicochemical behaviour, ease of manufacturing and the freedom of the intellectual property space around the structure. The process also generates vast amounts of data that can be used to train computational aids. It makes sense, then, to combine algorithms and robots with human intuition and experience to enhance the drug discovery process.

‘Chemical bonds are only defined by the minds of good chemists,’ says John Parkhill, researcher at the University of Notre Dame in Indiana, US. But his latest study turns this idea on its head. Parkhill’s team has designed a neural network – a sophisticated computer program that mimics the behaviour of a real-life brain – which is able to accurately determine bond energies.1

Parkhill and his team created a piece of software that breaks down molecules, then analyses and classifies single bonds according to their different electronic properties. Next, chemists taught the neural network using an existing database of over 130,000 molecules.2 With this information, and combining it with a series of different algorithms, the programme is able to predict bond energies, often beating the intuition of trained synthetic chemists.

‘Neural networks can be used to make quantitative models of chemical concepts that are not possible with just quantum mechanics,’ explains Parkhill. ‘[Before], I got asked all the time: “How much stronger is this bond?”. […] Now I can answer that question, because my machine learnt chemical bonding concepts.’