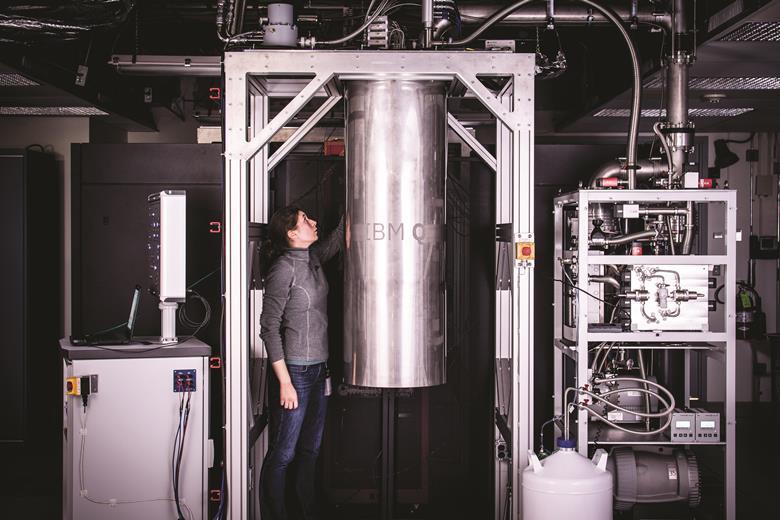 So far, simulating molecules and reactions is the use case for early, small quantum computers sketched out in most detail by researchers developing the new kind of algorithms needed for such machines… “From the point of view of what is theoretically proven, chemistry is ahead,” says Scott Crowder, chief technology officer for the IBM division that today sells hardware including supercomputers and hopes to add cloud-hosted quantum computers to its product line-up in the next few years…

Researchers have long used simulations of molecules and chemical reactions to aid research into things like new materials, drugs, or industrial catalysts. The tactic can reduce time spent on physical experiments and scientific dead ends, and it accounts for a significant proportion of the workload of the world’s supercomputers. Yet the payoffs are limited because even the most powerful supercomputers cannot perfectly re-create all the complex quantum behaviors of atoms and electrons in even relatively small molecules, says Alan Aspuru-Guzik, a chemistry professor at Harvard. He’s looking forward to the day simulations on quantum computers can accelerate his research group’s efforts to find new light-emitting molecules for displays, for example, and batteries suitable for grid-scale energy storage.

Microsoft is already focusing on chemistry and materials science in its quantum algorithm effort, saying a hybrid system combining conventional computers with a small quantum computer “has great promise for studying molecules.” Meanwhile, the article argues that breaking encryption, “although a genuine threat, is one of the most distant applications of the technology, because the algorithms involved would require an extremely large quantum processor.”

The demonstrations started on November 13. NASA brought out a simulation of how shockwaves from meteorites affect the atmosphere—and then how their effects reach the ground, from impacts to tsunamis. Also on board: a simulation showing how person-transporting drones could work, and a global weather prediction model. The Department of Energy presented about particle accelerators, quantum computing in science, and cancer surveillance.

The company Nyriad Limited, meanwhile, has aligned its stars with the International Centre of Radio Astronomy Research, to develop a “science data processing” operating system for a telescope called the Murchison Widefield Array, which itself is a precursor to the Square Kilometer Array. The Square Kilometer Array will require more computing power than any previous one: Its data rate will exceed today’s global internet traffic. Nyriad, at the conference, revealed its first commercial offering, spun out of its SKA work: a fast and low-power storage solution useful beyond the world of astronomy.

Now Jay Gambetta and coworkers at IBM have been able to use the approach to calculate the energy and bond lengths of a significantly more complex molecule, BeH2, as well as lithium hydride LiH and a simple model of a magnetic lattice. They used a quantum computer with six qubits made from superconducting quantum interference devices (Squids) cooled to just 25mK. ‘[This work] is a significant leap forward for the quantum regime,’ says quantum chemist Markus Reiher of the Swiss Federal Institute of Technology (ETH) in Zurich.

The trick, says Gambetta, was to find a ‘trial function’ – the initial guess about the solution to the quantum equations – that makes most efficient use of the available computing resources, so that the computer can still complete the calculation during the short time that the qubits remain coherent. To calculate an observable quantity like energy, rather than the full quantum state, Gambetta says that one can get away without having to worry about correcting for errors – it’s enough just to make sure they don’t propagate too quickly. Showing the possibility of getting results for real molecules using these ‘noisy’, error-prone qubits is important, Reiher says, ‘because these are the only qubits currently available’.

although we are constantly told that the unique selling point of quantum computers is their enormous speed compared with the classical devices we currently use – a speed-up that exploits the counterintuitive laws of quantum mechanics – it seems that the most immediate benefit will be the one Feynman identified in the first place: we’ll be able to simulate nature better.

In other words – and despite Feynman’s title ‘Simulating physics with computers’ – the initial value of quantum computers may well be their tremendous potential for predicting the properties of atoms and molecules: for chemistry. ‘Many in the community, as well as myself, believe that quantum chemistry and materials science will be the first useful applications of quantum computers,’ says theoretical chemist Alán Aspuru-Guzik of Harvard University in the US.

we need to consider how traditional binary computation has changed chemistry. It is rare to see an experimental study that deals with structures or mechanisms that does not have a computational aspect – either to guide the experiments or further interpret the data. It’s almost 10 years since I attended a Dalton Discussion conference on main group chemistry, and it was noted that almost every paper had computational work, either in collaboration with other groups or within the group itself.

Chemistry isn’t what it used to be. There was a time when things were, some might argue, simpler. It was practical, wet, occasionally dirty, and occasionally smelly. Now, a large group of chemists are exchanging the 8-hour lab sessions for screen marathons, not working with chemicals but simulating them. The rise of molecular modelling is changing the face of chemistry in exciting new ways, which could present both opportunities and challenges to the chemical sciences as a whole and to chemistry education.

Microsoft said its new quantum computing language, which has yet to be named, is “deeply integrated” into its Visual Basic development environment and does many of the things other standard programming languages do. However, it is specifically designed to allow programmers to create apps that will eventually run on true quantum computers… Like other companies, such as Google and IBM, Microsoft has been working for years to advance quantum computing research to the point where the technology becomes feasible rather than theoretical… Joining Satya Nadella on stage, Fields Medal-winning mathematician Michael Freedman added, “Microsoft’s qubit will be based on a new form of matter called topological matter that also has this property that as the information stored in the matter is stored globally, you can’t find the information in any particular place…” The programming language is expected to be available as a free preview by the end of the year and “also includes libraries and tutorials so developers can familiarize themselves with quantum computing,” Microsoft said.

I per cert, hi ha més d’una tecnologia per construir ordinadors quàntics, segons Quantum Computers Compete for “Supremacy” – Two technologies may be on the verge of surpassing even the most powerful digital computers in a year or so, but key challenges remain unsolved

scientists first have to figure out how to actually build a quantum computer that can perform more than the simplest operations. They are now getting closer than ever, with IBM in May announcing its most complex quantum system so far and Google saying it is on track this year to unveil a processor with so-called “quantum supremacy”—capabilities no conventional computer can match.